Elephants in captivity are not a good thing. Elephants in zoos. Elephants in temples. Elephants in ‘Elephants in Elephant camps’. Elephants are slaves and captive labor at best. Beggars at worst. But they don’t just become it. They’re trained. They’re broken. And the Govt does it in its watch. And you know about the ‘rogue’ elephants that are caught and they put to task! Well they just disappear looks like. India needs only happy well adjusted pachyderms. India is still the land of elephants and snake charmers in the Incredible India brochures, right? elephant at the dubare elepahnt camp

The following is an account of 2 individuals travelling together to the Sakrebailu Elephant (training camp). This one is 300 Kms. from Bengaluru, 12 Km from Shimoga. And Karanataka is dotted with many – in Dubare, Chamarajanagar and Nagarhole. The latter 3 are considered more ‘upmarket’ – Sakrebailu more approachable and more importantly is the one where you’re allowed to ‘interact’ with the elephants. As the Central Govt website says for Sakrebailu:

“On the way to Thirthahalli from Shimoga, 14 kms away from the city you can hear elephants reciting their lessons.  Yes its not a joke its fact that you can find here many elephants being trained by training professionals.  Elephant from the adjoining forests bathe at this spot before they re-enter their forest abode. Every morning these majestic creatures waddle down to waters and after playfully cleansed their bodies and satiated their thirst, they leave the waters before the rays of the sun get stronger. They are off to deal with their day’s routine only to return the following day.  To catch a glimpse of these mammoths at play in the waters, get there before 9 a.m.”

Idyllic surroundings no doubt. In the shrinking land of elephant – a slice of paradise. Kaustubh Dharkar and Naina Athale (both from Mumbai) went to Shakrebailu on 22 June 2014 to soak in the paradise.

But before we continue please watch this video. No please. Its important that you watch it and not turn your eyes away. Tomorrow this is the elephant you will give money to at a temple, or ride at a camp like this or come to Karnataka or Kerala or any of the ‘elephant states’ seeing it in a slick brochure. The video is shaky because it was unexpected and Kaustubh Dharkar’s hand was shaky.

This is Kaustubh Dharkar:

“My spouse and I were vacationing in Karnataka alongwith our friends the Athales in June 2014. We stopped over at Shimoga on the 21st and 22nd June 2014. We were informed about some tourist spots around Shimoga which we decided to visit. One of these places was the Sacrebyle Elephant Park, about 14 Km from Shimoga. We were informed that the Camp is for training of elephants and that it is a happy place for the pachyderms who are well looked after by the staff, bathed in the backwaters of the dam, well fed and generally lead a happy life. It is specially a camp for the rehabilitation of elephants who have been abused elsewhere like in temples and circuses.

“We arrived at the Camp on the 22nd June 2014 full of expectations of happy elephants gamboling in the open spaces and interacting with humans. What we saw there shocked us terribly with the appalling cruelty and abuse to which the poor elephants were subjected.

“What we noticed immediately was that most elephants including the baby elephants were tightly shackled to strong pegs driven into the ground with strong chains which definitely must have caused injuries on their skins, due to the tightness of the chains. Other elephants were tied using big rough rope. The lengths used did not permit the animals even a few inches of movement which must have been very uncomfortable.

“But what was more appalling was the abuse that we saw being heaped on a baby elephant who seemed to have got entangled in his rope, possibly while attempting to get near its mother. The staff and mahouts trying to cut the rope lacked any empathy for the baby elephant and kept trying to get it to do their bidding by walloping the poor animal with sticks. It was heartbreaking to hear the pitiful cries of the baby who obviously did not understand the instructions. It also appeared to me that the staff was deriving pleasure from the animal’s agony.

“When the abuse got too violent we intervened in trying to stop them from the beatings. That was when one of the handlers explained to us that they were “TRAINING” the animals. He also admitted that “the only way that the animals can be trained to entertain humans was to beat them into submission!” I am glad that I managed to get the entire episode videoed on my mobile. It has been posted on YouTube.

“Makes us wonder that if such abuse can be administered during the Camp’s open hours of 7 AM to 11 AM in the presence of visitors, what horrors are heaped when the Camp is shut for 21 hours? And I also wonder at the silence of the visitors who silently watch the cruelties and maybe consider them entertainment?

“I demand that strict penal action be taken against the staff which will serve as a lesson to be more considerate to the animals under their charge. I guess that intensive training is also essential for the staff to ensure that they are kind to the animals rather than consider them as something on which to take out their frustrations. “

And this is Naina Athale of In Defence of Animals, Mumbai is a complaint to the Chairperson of Animal Welfare Board of India (AWBI. They are those guys appointed by the Central Govt. get re-elected each term and do precious little but as you now hear achhe-din-aane-waale-hain. The author of this article is in receipt of a mail response that says “we will certainly act’. Hopefully in time for these pachyderms).

“Here are photographs of the second camp across the road from the main camp visited on 22nd June. This was much smaller, in the open and had three of the elephants from Hassan who were brought there as they were ‘rogues’. The enclosures were very small for the larger of theelephants. pics. no. 455, 459,460 & 461 are of the elephant who was supposedly a killer of 3 humans in Hassan. This was told by an old caretaker there. He had wounds on his neck and his back. I was told the wounds were because of very tight tying around the neck. He was certainly too large for his small enclosure and was certainly sick. The wounds are seen in the photographs. A news item in ‘tarun bharat’ on the 24th, said that he had died of unknown causes on the 23rd, 2 days after my visit. “Staff at all facilities for elephants need urgent training as well. This was felt strongly as in both camps; the reasons given by the staff to us for whacking and caning and poking with their sharp metal prods was acceptable to the other visitors and all are going back with the impression that I was observing closely and I assure you all, that they did not say anything which sensitized people to elephants, in fact their actions were justified and visitors have gone away thinking that elephants deserved to be chained, trained and fit to only entertain and bless people at temples and as beggars. I spoke to the English speaking people around to gauge their reactions and I realised that it was exactly what I thought. There was very little empathy for the elephants” 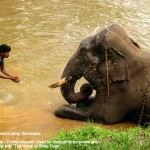 elephant at the dubare elepahnt camp 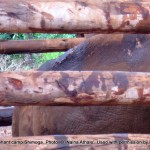 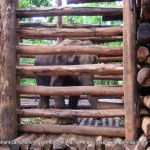