VoSD writing on this publication is seldom about personal statements made for us, except in exceptional cases where the falsity is hugely absurd and action reeks of outright vendetta – and with one purpose only ‘close VoSD’. This was the demand laid out by Sneha Maiyya in police station in front of several of my colleagues and police officers – complaint will be withdrawn if VoSD is closed down immediately! The irony is that none of the people and parties that wish that for VoSD provide any credible rescue service at all! And of course they have no mandate since VoSD still does not function on public money. What do you do in situations like this – keep making police complaints.

The low personal level at which Mr Bafna gave an ‘official’ response is given here, the allegations and developments of the repeated complaints made by Sneha Maiyya are here, and now you can see the language and level of false allegations by Sarvodaya Sevebhavi Sanstha on VoSD for restraining us from using a name we did not use, and organizing an TGIDS ’14 – an event which we were not organizing! Ms Maiyya has in earlier litigation been collusive with Mr Bafna, represented by the same lawyer (its a matter of public record), and Mr Vinay Moray was an employee of Mr Bafna at ARF (also a matter of public record).

The circumstance of the TGIDS ’14 show, and our lack of involvement has been referred to before here. It was clear that neither was VoSD an organizer nor have ever made a claim on the name or term. That discussion is purely between Blue Cross of India, Sarvodaya and the team that organizes TGIDS. The attempt through this disclosure is only to make a public record of what the plaint of Sarvodaya through Mr Vinay Moray has to say for a situation that did not involve us and yet makes us the defendant to put into effect what they really want!

These are a few nuggets from their pliant which they know to be absolutely false and is being concealed with the court, when VoSD records as a trust and a tax payer, of our transparency, process, automation, all are available with you from the beginning on this website, on the VoSD FAQs page and the VoSD Facebook page for years. When nothing that Sarvodaya does in any of these respects is a fraction of what we do everyday. 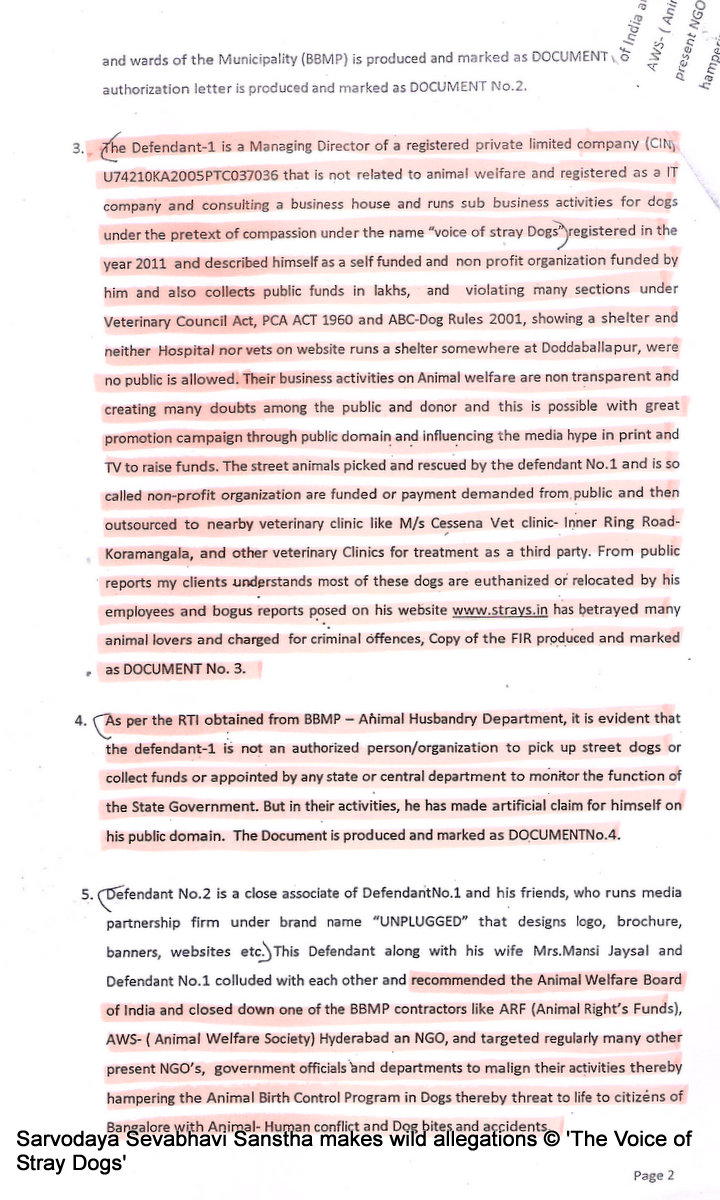 Sarvodaya rant and vendetta against VoSD page 9: The genius In the same pliant they claim they do ABC for at least 300 dogs a month! Mr Moray and M/S Sarvodaya you do that on our money – taxpayers money that we pay to BBMP so there are no favors there. VoSD does more rescue of critical dogs in a month than you do ABC. And more rescue in a day than you do in a year. And its not on tax payers money. And that is the difference. But you know it already don’t you?