AWBI does not deign to be present in the High Court of Srinagar, Kashmir where it is a respondent in the PIL against dogs

This is a series of posts on Kashmir. As with the other writing on ‘The Voice of Stray Dogs’, unless otherwise specified the writing expresses the opinion of  The Voice of Stray Dogs, and not necessarily that of VoSD Board members since individual comment/ contribution and consent is neither sought nor received.

We have covered the litigation asking for other than ABC (spay-neuter) as a solution by ‘human activists’ in Kashmir [search on Kashmir in the search box above]. In this PIL No 361/2011 by A R Hanjura, Syed Musaib & Nadeem Qadri  the Animal Welfare Board of Indian (AWBI) is respondent number 5, and where in the Application for Direction to the Court the petitioners showed that “The Animal Welfare Board of India remained a mute spectator till the situation tuned alarming and human lives were lost to dog bites”. The start-stop escapades of the AWBI are well chronicled in this publication but here’s a stop press moment: AWBI is not present in court at a court hearing when the court gives direction to explore action other than ABC!

In the order dated 1 June 2012 (PIL No 361/2011, CMP No 929/2012) the presiding judge gave directions to the Chief Secreatary of the State to constitue and expert committee regarding the subject matter to “….suggest further actions other than Animal Birth Control (ABC) programme, because we have a feeling that nothing satisfactory if being done on the ground…”

Far all the tomfoolery of the AWBI & its much publicised action in Kashmir there was no AWBI lawyer present in the court the day of the hearing to present to the Hon’ble Court the facts of the steps taken since May & the effects that they will have in time. 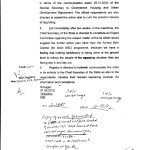