ABC Mom: The case of a widespread by poorly managed ABC in Bangalore by Vikhyath Bheemesh

The cruelty perpetrated on Bangalore’s dogs by an inefficient BBMP babudom and several insincere AWO’s participating in the Animal Birth Control (ABC) program – has been covered many many times on this publication. The widespread but poorly managed ABC program causes unthinkable cruelty on Bangalore’s dogs – with poor surgical practices and horrible tagging and drop practices.

One of our contributors reports on a litter of 4 puppies he has been feeding  near his workplace. Yesterday he met their mom – an ABC dog! Both ears meant doubly sure of the ABC procedure for BBMP right? Apparently not!

As you can see from the photographs her ears are clipped with the ‘v’ – BOTH ears as BBMP insists. Clearly this is a dog on a sum of approx Rs 1,000 has been paid by BBMP to an AWO (you can see here a list of AWO’s in Bangalore and where they operate). The AWO vets actually showed the organ of this female dog to the AD of BBMP responsible for the ward, who verified and payments were vetted at the BBMP JD’s office. That’s how it works. So there IS a chain of command. It’s your judgement on how it works.

PS: BTW both the ears are clipped on the claim that it is difficult for dog catchers to see a dogs ears when they are sleeping when about to be caught. Now if ANY of the good babus in BBMP had ever seen a dog catching operation in practice they’d know that dogs start barking when the catching van and catchers are within 200 mts. Catch them ‘sleeping’ within eyesight of a dog catcher. However that is a totally different discussion and there is a different hard wiring of brains apparently that is the criteria if one wishes to be a babu in BBMP or another municipal corporation.

The ABC mama with her pups

Maybe there is something to eat there? 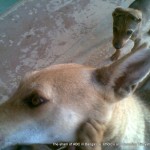 What? She’s been sterilized? 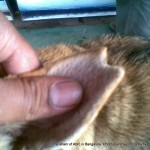 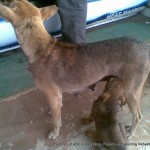 Both ears meant doubly sure for BBMP right? Apparently not! 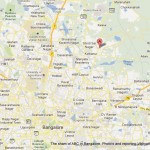