This is a series of posts on Kashmir where getting a head-start into writing has been a nightmare since it seems a highly personalized polarized situation. So we’d refrained comment without any clear evidence in our hands. However now we’re in possession of a bunch of official documents – which we’re digitizing and putting out and asking the relevant questions that arise from them. As with the other writing on ‘The Voice of Stray Dogs’, unless otherwise specified, the article is authored by Rakesh Shukla and expresses the opinion of Rakesh Shukla & The Voice of Stray Dogs, and not necessarily that of VoSD Board members since individual comment/ contribution and consent is not sought.

In Part I of this series we saw the questions that arise out of the meeting between SMC-AWBI-Animal Husbandry where decisions on the location and functioning of the said ABC facilities are decided. Here we look at the tripartite Memorandum of Understanding (MOU) between Animal Welfare Board of India (AWBI) – Municipal Corporation of Srinagar (SMC) and Dean Faculty of Veterinary Sciences and Animal Husbandry (Vet College) [download and read the The tripartite MOU AWBI SMC VetCollege] This gives rise to some serious questions on the agreement reached between the AWBI, SMC and The Vet College:

Surprisingly – there seems to be little/ no difference between this agreement and the other MOUs signed by AWBI and that’s surprising since this was especially complicated since this was for Kashmir. 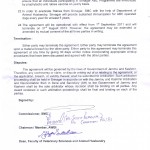