The ABC dog from Kapaswadi that could not be saved :(

We carried a rescue story by Rinky Karmakar just the other day. Here’s another one – equally heartbreaking, and then some. This baby did not not make it.

This little girl was found about 1200hrs in front of the AWS Kapaswadi facility on 10 Sept (Sat) by Amit Pathak. On checking Amit and Rinky found that:

When Rinky arrived at the scene 15 minutes later she saw this completely emaciated girl with maggot wounds all over. She would cry on every touch throughout her body. She was taken to the vet and and in addition to being severely malnourished and with maggot wounds, she was suspected to have broken ribs. She was euthanized a little later to relieve her of her misery and the cruelty of the world around her. 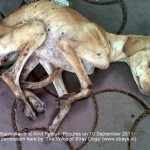 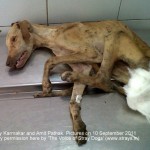 At the vets, with maggots oozing out of her 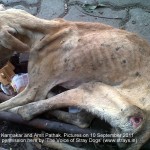 Wounds all over her body, broken ribs, maggot wounds 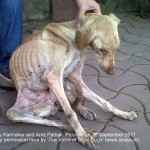 This would be the last time her head was up