Some volunteers visited the GHMC Autonagar pound yesterday. It was essential to see the facility in the backdrop of a high level meeting on the condition of the pound due on 6th Sept 2011 in Hyderabad, and with the Mayor, GHMC officials as well as the CVO maintaining that all the reporting is incorrect and nothing is amiss!

It can be clearly seen that in ‘preparation of the AWBI visit on 6th Sept, GHMC is dressing up the facility.  It was clear just from the fact that the entire staff was working on a Sunday. The pounds were being washed, water taps were being installed and walls were being built. But nothing had changed for the dogs.

Watch video of piled up and partially eaten bodies of pigs and dogs at the GHMC Autonagar dog pound:

Prashant and Kalyan heard cries from the just behind the pound and were  shocked to see a dead whelping mother with puppies beside here trying to suckle. None of the staff despite hearing the cries of those poor puppies had tried to help  in any way.

Behind the pound dozens of dead bodies of dogs and pigs were dumped. Most of them dead since 2 or 3 days. And also some dogs can be seen feeding on these dead animals.

All the agencies need to be aware of this, and be on notice, as they deliberate on the future of the dogs in the pounds run by GHMC. 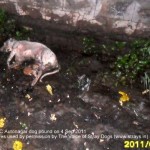 Pups suckling at rotting corpse of their dead mother 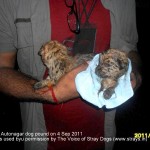 The 2 pups rescued by volunteers 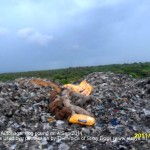 Dogs and pigs thrown with garbage behind the pound 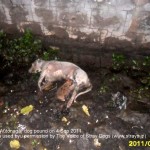 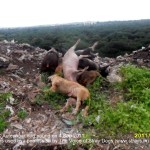 Bloated bodies of a half a dozen pigs and a dog One of the 2 surviving puppies