Did the Chennai NGOs including Blue Cross of India, SPCA and PFA fight the Chennai Mayors order for creating dog pounds? And are they fighting it now?

straysadmin Jun 07, 2013
Dog pounds are not what the doctor ordered for Indian Dogs. Animal Birth Control Rules are. Typical state governments that give abysmal healthcare to its citizens through government hospitals, and incarcerates prisoners in squalor, and can’t manage any level of even a ABC programs in Jammu & Kashmir & Kerala can’t but re-produce the type of ‘dog pounds’ found in Hyderabad & Shimla.

Minutes of the Mayors Meeting in Chennai Pg 1

But now dog pounds in Chennai don’t just seem an illegal inevitability but turns out the decision to make them was taken in the presence of Chennai AWOs including the Blue Cross of India, PFA & SPCA. This comes out clearly in the minutes of the “monitoring committee“meeting held on 15th February, 2013. The meeting was convened by the Commissioner, “regarding animal birth control“. It was in this meeting that the dog pounds were agreed upon.

3 glaring areas of AWOs relinquishing responsibility through this decision and subsequently stand out:
A reading of the monitoring committee meeting minutes show that:
WHAT BECOMES APPARENT FROM A READING OF THESE MINUTES :
AND THE GLARING QUESTION THAT STANDS OUT IS : Why didn’t the animal welfare NGOs of Chennai that participated in the meeting held on 15th February, 2013, come out into the open about this shocking illegality? If in fact they dissented during the course of the meeting, and the minutes are inaccurate, did they write to Commissioner recording their protest? If they were as horrified as are we, WHY DID THEY CONCEAL THIS FACT?
Why are not the Chennai AWOs standing up and fighting against a wrongful decision and have not fought from the beginning? 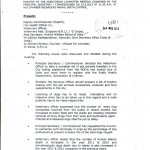 Minutes of the Mayors Meeting in Chennai Pg 1 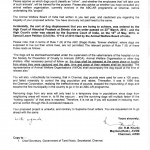 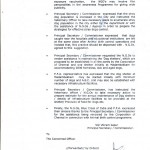 Minutes of the Mayors meeting in Chennai Pg 2