Report by Rakesh Shukla for The Voice of Stray Dogs –  23 July 2011. Pictures on location at Sarvodaya Sevabhavi Sanstha

Catch Neuter Vaccinate Release (CNVR) procedure can be a solution for reaching effective higher throughput of ABC surgery especially in a city such as Bangalore where there is a tremendous amount of pressure for stray dog population control from citizens, media, BBMP and the state government. CNVR procedure differs from conventional ABC procedure primarily since it is ‘field procedure’ and ensure the release of the dog the same day as the capture. doing away with the holding period.  View the presentation on Animal Birth Control (ABC) using the Catch-Neuter-Vaccinate-Release (CNVR)-method. Dr. Ilona Otter, IPAN

Not only is the procedure quicker, and requires less effort in maintaining and caring for the dogs after surgery without compromising the safety and welfare of the dogs, its better because:

On 23 July I had the opportunity to view a field camp under the Bangalore BBMP’s ABC program. This is run by Sarvodaya Sevabhavi Sanstha (President Dr Madhav Jinke) managed in Bangalore by Vinay More . It was a pleasant surprise since, even though it was a under a temporary shelter, the open air environment made sure there was no fetid still air, it was dry, and made for actually a clean working environment. It was evident that since we’d reached without any prior communication – this was the usual working environment. It was also evident that the surgical equipment was being kept sterile, or was disposable, and the amount of used injectible vials was testimony to the medication used for the dogs recovring in the recoring pen after the procedure. All in all a good example of how to set up and execute CNVR. 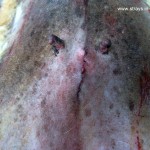 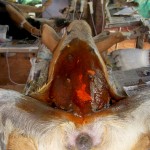 Dog laid on table, tied with IV and disinfectant just before incision 4 dogs in different stages of surgery The vet begenning the surgery with the 1st incision Captured dog shaved and being prepared for surgery

Sutured, vet cleaning up after the surgery

Getting ready for epidermal sutures 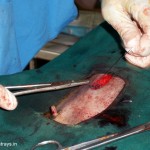 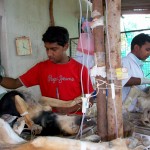 Dog on IV ready for surgery