Jallikattu Judgement: When the Supreme Court of India declared the rights of animals to be an issue of “Seminal Importance” (Part II)

The Supreme Court of India banned the use of bulls and bullocks in performances such as jallikattu, bullock cart racing, etc., by its landmark judgment pronounced on the 7th of May, 2014, in the matter titled “Animal Welfare Board of India Versus A. Nagaraja & Ors.”

Through Part I we released with permission, a part of the material that was before the Hon’ble Supreme Court, i.e. one set of jallikattu pictures, report, and video recorded by an AWBI observer during 3 jallikattu events in year 2013, demonstrating horrific abuse of bulls, and huge cruelty. It is note-worthy that so moved were the Hon’ble Judges upon a consideration of all material before them, and upon a thorough consideration of the matter, that they opened their judgment in these terms :

“ We are, in these cases, concerned with an issue of seminal importance with regard to the Rights of Animals under our Constitution, laws, culture, tradition, religion and ethology, which we have to examine, in connection with the conduct of Jallikattu, Bullock-cart races etc. ….. ” Accidents are a common occurence at races. This bull is bleeding profusely from the neckThrough this part, i.e. Part II, we are releasing with permission, the bullock cart racing pictures that were before the Hon’ble Court. It was these, and other allied material, that prompted the Court to record at paras 20 and 21 of its judgment, as follows :

20. We notice, in various parts of Maharashtra, varied types of Bullock-cart races are being organized. Bailgada Sharyat is a race where no person rides the cart. In such a race, at times, Bullocks are brought to the venue blind folded through trucks and let free, through a ghat either side of which spectators, large in number, assemble. Due to sudden exposure to the light, after unfolding, and the huge noise source made by spectators, Bullock get terrified and run in straight on the slope. Many of the Bullocks are tortured and whipped to make them run and the price is decided on the basis of time taken to cover gap of approximately 300 meter distance. Races are also there where Bullocks have to cover 10 kilometres and more. Before and during the course of the race, cruel practices like beating, twisting of tail, biting tail, poke with spiked instruments, electric shock etc. is given. Races, such as, Ghoda Bail Sharyat which involves a horse and a bull on the same cart is also being held. Sometimes, a bigger Bullock is paired with a smaller one. Various forms of torture are adopted in all these races.

21. We are sorry to note, in spite of the various directions issued by this Court, in the conduct of Jallikattu, Bullock-cart Race etc., the regulatory provisions of TNRJ Act and the restrictions in the State of Maharashtra, the situation is the same and no action is being taken by the District Collectors, Police Officials and others, who are in-charge to control the same, to see that those directions are properly and effectively complied with and the animals are not being subjected to torture and cruelty. Being dumb and helpless, they suffer in silence.” 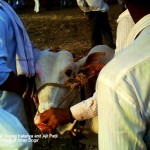 Animals can be controlled through the medium of pain and fear. Bulls bleed from their nose due to the excessive pulling of nose

Animals are beaten and whipped till submission 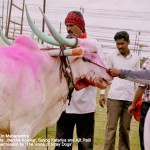 Accidents are a common occurence at races. This bull is bleeding profusely from the neck

Before the races begin, a cruel whipping session called ‘tapavane’ (heating) takes place in which all the bulls are lined u 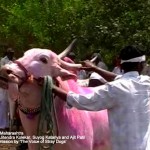 Due to extreme exhaustion and stress, the bulls are seen with their tongues hanging out which indicates condition called ‘heat For a task like attaching the animals to the cart, they are subjected to extreme torture. Several men have to pull and push the Forcefeeding alcohol to a bull at a Jallikattu/ Bull racing venue

Injuries due to aari stick with a nail 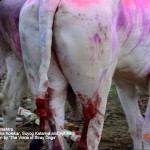 Profuse bleeding, broken and fractured tails are a common sight due to twisting and biting of tails 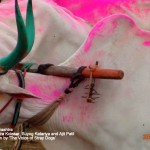 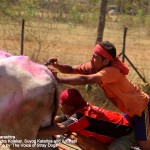 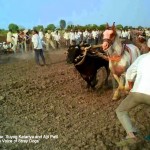 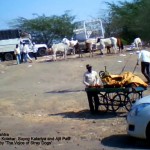 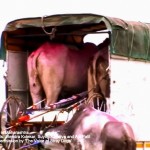 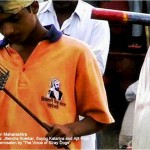 Tochani, spiked instrument use to prod the bulls 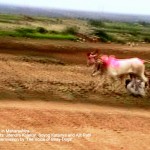 Aari stick with a nail used to prod the bulls