Know your dogs’ rights: Use of Elevators by pet dogs (Part I) – What you must know about ‘banning‘ this and other unlawful restrictions

If you are a pet parent, and live in a multi-storeyed apartment complex, and your Apartment Owners’ Association, or the governing body of your housing society, or your Residents’ Welfare Association, or Estate Manager, or anybody at all,

THIS is what you should know, and see :

See this Indian Express article http://www.indianexpress.com/news/peter-pan-can-use-apartment-lift-now/399463/  and this one http://articles.timesofindia.indiatimes.com/2010-11-30/india/28231380_1_pet-dogs-housing-societies-elevator

These newspaper articles, the first of which was circulated in December, 2008, and the second in November, 2010, are about the legal cases that Ajay and Nandini Marathe, and the D’Souzas, respectively, had filed against their housing societies at Mumbai, after they were disallowed the use of elevators for their pet dogs.

The Marathe’s dog, Peter Pan alias Shimu, was 11 years old and had osteoarthiritis. Despite their producing the requisite papers to affirm as much, the General Body of their society had nevertheless resolved to ban pet animals from using apartment lifts. That was what prompted the Marathes to fight it out, and file a complaint before the concerned Consumer Disputes Redressal Forum under the Consumer Protection Act. The Consumer Forum upheld their contentions, and held that the housing society’s move to ban pets amounted to ‘deficiency in service’ to its members. The use of the apartment lift by their dog Peter Pan alias Shimu, was then allowed.

The D’Souzas had 2 dogs – Barney, a labrador, and Dash, a mongrel. They resided on the 10th floor of their apartment building, and were shocked when their housing society’s general body passed a resolution at a meeting, resolving to charge pet owners extra, for the use of the elevators by their pets. They challenged the same at the concerned Consumer Disputes Redressal Forum ; and the society’s diktat was struck down. This was the famous case in which the Consumer Forum observed that pets are members of the modern, urban family, and can use the lift for free.

The judgments that were actually passed are here:

A more recent article, circulated in a Midday edition of August, 2013, can be seen here :

A housing expert, Advocate Ameet Mehta, is quoted, and his answers to the questions put to him, excerpted in the article. What he says about the use of elevators by pets, is telling, and has been extracted below, together with the question that was put to him :

“QUESTION : Some housing societies have rules like: one cannot bring a pet into a lift. Others disallow luggage and furniture in lifts. In some cases, there are notices stating that servants cannot use lifts. Are managing committees allowed to make rules with reference to lift use?

ANSWER : The Managing Committee is an elected representative of the Society to act in favour and to make decisions on behalf of Society. By passing a Resolution in the General body, the Society decides various acts to perform / to be performed by the Society. Many Society’s make rules that, “one cannot bring pets into lifts” since it may make a lift unhygienic or can cause hurt to a co-passenger. The Managing Committee has to think about the safety of members. In many Societies, there is more than one lift, wherein the first lift is used for the Society members and their guests and the other one is used as a service lift where pets, materials etc. are allowed to travel. Servants are also allowed in the service elevator. However there are no provisions related to pets in bye-laws. Whatever the General Body decides is final and binding on members as long as it does not ‘ultra vire’ the laws of the land.

There has been a judgement that has set a precedent for housing societies on how to treat pets. “The Central Mumbai Consumer Redressal Forum had rapped a Mahim Society for charging one of its members Rs 500 for each of his two dogs using the elevator. Noting that pets are members of a modern, urban family unit, the forum ruled there is no reason why pets can’t use elevators when outsiders, including service providers such as milkmen and vendors, have access to the facility without any charges. The bench of Nalin Majithia and Bhavna Pisaal observed, “We don’t find the Society’s view correct of restricting dogs to move up and down via staircase and be cruel to them. The charges to be paid by complainant i.e. charge them an extra Rs 500 towards each dog is illegal, and is an instance of unfair trade practice. In Indian culture, dogs are common pets and usually treated as lovingly as other members of the family.”

Ameet Mehta has also, in his answer to the question put to him, referred to the judgment passed in the case of the D’Souzas, and affirmed that it had set the precedent for the manner in which housing societies have to treat their pets.

Most statutes also provide for the framing of Rules under those Acts of Parliament or State Legislature, on the subjects and for fulfilling the purposes stated in those statutes.

An Apartment Owners’ Association, or the governing body of your housing society, or your Residents’ Welfare Association, are NOT mini legislating units that can wildly frame bye laws at will, and impinge upon rights and freedoms guaranteed to you by the law of the land. They cannot ban pets, or ban the use of elevators by pets, through notices put up for the purpose, or bye-laws framed or amended for the purpose, even with the consent of the general body.

We are also setting out for you below, the link to ‘Model Bye-Laws for House Building Cooperative Societies (Apartment Type)’ framed by a group of legal experts http://www.legalpundits.com/Content_folder/MoByLw.pdf

Paragraph 4 deals with Objects – 4. A., to newer societies where apartments are under construction ; and 4. B. to older societies with constructed apartments occupied by residents. Clause (f) of both reads as under :

“To take all necessary steps for the efficient administration of the Society within the framework of the Act, Rules, Bye-laws and other enactments in force and in accordance with Cooperative principles and secular ideals.” 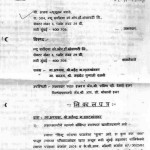 Use of elevators by dogs. Court judgement – pg 1 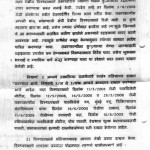 Use of elevators by dogs. Court judgement 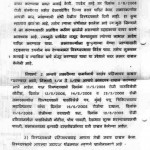 Use of elevators by dogs. Court judgement – pg 3 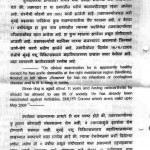 Use of elevators by dogs. Court judgement – pg 4

Use of elevators by dogs. Court judgement – pg 5 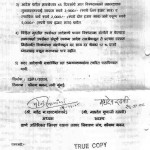 Use of elevators by dogs. Court judgement – pg 6