Delhi Municipal Corporation finds every alibi not to make an effective ABC program, while sitting on 78 Municipal Veterinary facilities

A news article in the Hindustan Times dt 10 May 2012 headlined “Dog sterilization to take a hit in New Delhi”says ‘With the trifurcation of the Municipal Corporation of Delhi (MCD), the drive to sterilize dogs in the Capital has hit a roadblock in the north and east corporations. The cash-strapped corporations would have to put the drive on hold for a couple of months as there is not a single dog sterlisation facility available within their jurisdiction.’  A Municipal Corporation office is quoted as saying “It would be very difficult for us to control the stray dog menace in east Delhi municipal corporation (EDMC) and north Delhi municipal corporation (NDMC). The dog population could go up by 30-40% in east and north corporations.”  The article says “.. there are over 2.8 lakh stray dogs in the Capital and the number could climb beyond three lakhs in a couple of months…” Now compare this information with what is the reality on the ground:

The Animal Welfare Board of India (AWBI) had written a letter to the Cheif Minister of Delhi on 25th March, 2011 requesting the governments support for ‘Delhi Government help solicited for stray dog population management, and making Delhi a zero-rabies city’. The letter cited that:

Needless to say no real action on the ABC program has been taken, other than the buzz of large scale dog pounds being made in a Delhi by the MCD and some vet agencies from outside India participating in the future ABC without local AWOs 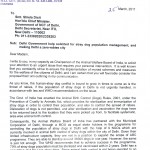 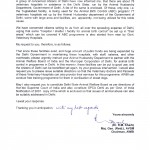