Is Bangalore’s the only ABC program were dog complaints include being “mental”? Dog captured because it is "mental"!

This account is of AWS visit by “The Voice of Stray Dogs” on 9 Sept 2011. ABC rule allows dogs to be brought in on complaints from residents/ citizens if the dogs is attacking or is described as a ‘furious’ dog. The dogs have to be released at the same location after observation.

An earlier feature here showed small puppies being kept in AWS kennels – captured against complaints of being ‘aggressive’. And now you can see the frivolous grounds on which citizens are complaining and of dogs being picked up. This poor dog was picked up because it is “mental”. Now what kind of aggravation or disease it is – we leave to your judgment. Note that:

Feel free to leave your comments for BBMP on what you think of complaints and complaint handling.

You should also see the amount of blood found in a kennel and the bloodied pliers in that pool of blood. We don’t have a theory to describe what could have happened at the scene – do you? 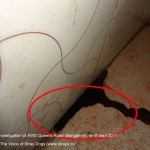 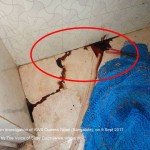 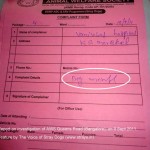 Dog captured because it is “mental”! 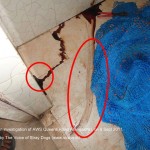 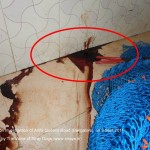