There have been repeated complaints from residents of the ARF’s Mahadevpura zone (see story on wards in this zone and other details) that stray dogs have been picked up for ABC and have not returned. These complaints are lodged in the complaint register. The people in charge of the camps are perplexed since they did not pick up dogs from the said areas and they do not have a record of the dogs being brought in for ABC of the said description(s) from the said area(s) on any dates nearby.

The only other explanation would be that these dogs were picked up by the Rapid Action mandate of AWS which can pick up dogs, even without a complaint, from any ward.

However on 13 Aug 2011 the employees of the ARF KR Puram camp found a vehicle described as a ‘white Tempo Traveler’ bearing no KA 01 C 8392catching dogs in Udayanagar (under the Mahadevpura Zone).  On being approached by the ARF employees the van stopped catching dogs and immediately left the area. ARF raised a complaint to the Additional Director of BBMP about this. 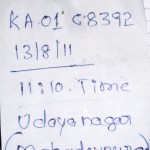 On 27th Sept 2011 (Sat) volunteers of  The Voice of Stray Dogs were at the CUPA dog pound in Koramangla. They were able to confirm that the van bearing no KA 01 C 8392 was actually a dog catching van from the CUPA Koramangla dog pound.

As poorly conceived and executed the idea of Rapid Action of AWS with the mandate to enter any zone is, it is inconceivable that AWO’s find it convenient to enter other AWO’s zones to pick up dogs.  If this is a routine practice it is against all norms of propriety and practice. If this is not a routine practice then surely the AWO’s will not be able to conveniently enter the same zone and drop off dogs at the right location. 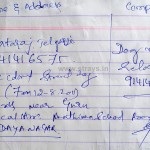