Chutki’s Experiences on The Voice of Stray Dogs

The entire book Chutki’s Experiences published both in English & Kannada is © Shamalatha Rao. Content and pictures here are used with permission. Read the book to understand why’s Chutki, the little stray puppy, is wondering why are dogs displaced and then blamed for all the dog-fights and human frights – when humans are responsible!

Shamlatha Rao has put together an entire book as a play for children – and it is an outstanding effort because of the lucidity with which complex, including legal, issues are highlighted. She uses ‘speaking animals’, who narrate their plight in the hands of insensitive humans and appeals for empathy.

In addition to the narrative, each page gives references in the footnote to the existing Animal Protection Rules like the ABC Rules (2001), PCA Act (1960), Wild Life Protection Act (1972), Prevention of Cruelty to Draught and Pack animal Rules (1965). There are answers in an FAQ form and useful tips on how to behave with and help the street dogs and other animals.

English copies are available for INR 60 – which goes towards ABC programs – and Kannada copies (for free distribution in schools). These can be ordered on Chutki’s website from India or the US. 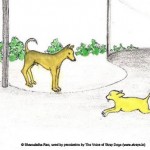 Chutki is a 5-6 months old female puppy and is running for her life as she is stopped by Appu, an adult male, neutered dog Chutki is narrating to Appu, how brutally dog catchers catch dogs and how she managed to escape 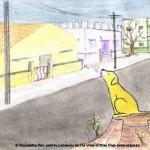 Chutki discusses with Appu how street dogs take care of their respective streets by alerting the people about strangers, check the field rat population and of entry of new dogs into their area. 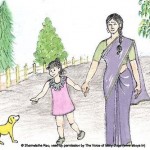 ppu runs away on seeing the mother-daughter duo. The young girl falls in love with Chutki, the street puppy 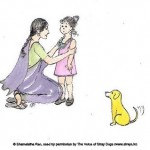 The mother wants to buy a “foreign dog”! The girl convinces her mom to adopt this Indian puppy as she is equally sweet n affectionate 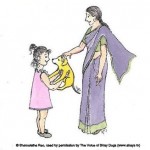 Mom realises her fault and recollects that Indian dogs are the best breed for Indian climatic conditions and also are genetically less prone to diseases. They decide to go home to inform the girl’s father and ask Chuki to wait! Chutki hears the dog-catcher’s voice and runs away deciding to come back again by the time the girl and her mother come to take her home. She sees a crowd that had gathered around a monkey-charmer…and sneaks into the crowd

At the end of the show the monkey has a quick exchange of words with Chutki as he comes to collect money from the on-lookers.Chutki feels sorry for the condition of the monkey and advises him to run away to the forest… Chutki is running away from the dog-catcher who is bent upon catching her. She manages to have a word or two with other animals whom she meets up with during her escapades. She meets a chained Pomeranian, an over loaded bullock, a cow near a garbage bin and sincerely sympathises with them and muses at the human ways of dealing inhumanely with animals. The mother and daughter, who want to adopt Chutki do not find her when they come back for her!
What happenend to Chutki then?  Does Chutki get adopted or not? Buy this wonderful book to help your children, and those in the neighborhood, understand stray dogs.
Be The Voice of The Stray Dog!